The campaign was wildly successful and managed to raise $68,523 in 60 days. This was mainly due to how incredibly generous Scott The Woz's fans are. And the ingenuity of Scott himself. The majority of the money raised was because Scott had the brilliant idea to offer his first YouTube video, The Internet and You, on a custom VHS filled with exclusive trailers and a thank you message. Half way into 2020 Scott and I asked ourselves how we could possibly top 2019's Charity Bonanza. The solution was obvious...get weirder and more retro with our flagship product. After a lot of scrapped ideas (or shall I say...postponed ideas) we came up The Mysterious Game of Crypticism. This box contained a working mystery NES game, hidden by a custom Scott The Woz removable label. The mystery game could be something as common as Rush'n Attack, or as rare as Gold Legend of Zelda. The box also contained a 44 page booklet (or game manual if you will) filled with behind the scenes notes, scripts, concepts, and fan art for Scott's channel. We also included a double-sided folded poster, as was common in an original NES box, stickers, fake business cards, and a few other surprises that we didn't even advertise.
Testing each of these games to ensure that they worked was one of the highlights of being cooped up at home in 2020. I definitely stumbled upon some classics from my youth, but found even more gems with amazing artwork I had never heard of. Late night testing NES games
Within an hour all 1000 Crypticism Boxes sold out! Scott and I quickly decided that we wanted to offer a Second Edition version of the box which we offered several weeks later. These Second Edition boxes were reminiscent of the Game Cube's Player Choice box art. In addition to offering these limited edition boxes, we also offered dozens of 2020 exclusive posters and apparel based on Scott's many episodes such as The Dark Age of Nintendo, The WiiWare Chronicles, The Trial, and more. The Dark Age of Nintendo, The Internet and You, and The WiiWare Chronicles After two months, and thousands of products sold, we  finally ended the campaign having raised $203,762 to charity! Critical Care Comics is a Las Vegas based charity dedicated to bringing joy to children in hospitals by having comic books hand-delivered by a Superhero cosplayer. As the charity's resident Superman I have personally seen the good that these hospital visits can bring!

This $100,000 will help us buy tons of new comics and toys, allow us to care more for our frontline medical staff, and to donate to other causes in the community we hold dear. We’re so excited to help our community and we’re so grateful for Scott’s help in taking our mission to soaring new heights! Children's Miracle Network is one of the largest national children's charities that has helped provide free hospital care for thousands of deserving children. Since receiving this donation, they have been able to support the medical needs of kids who need it by providing financial support, purchasing needed equipment, and so many other ways. 
I'm so incredibly thankful for everyone who helped support this amazing cause.
Thanks again for making the world a better place!

ps. just wait and see what we have in store for this year's Scott The Woz Charity Bonanza! 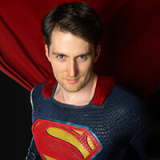